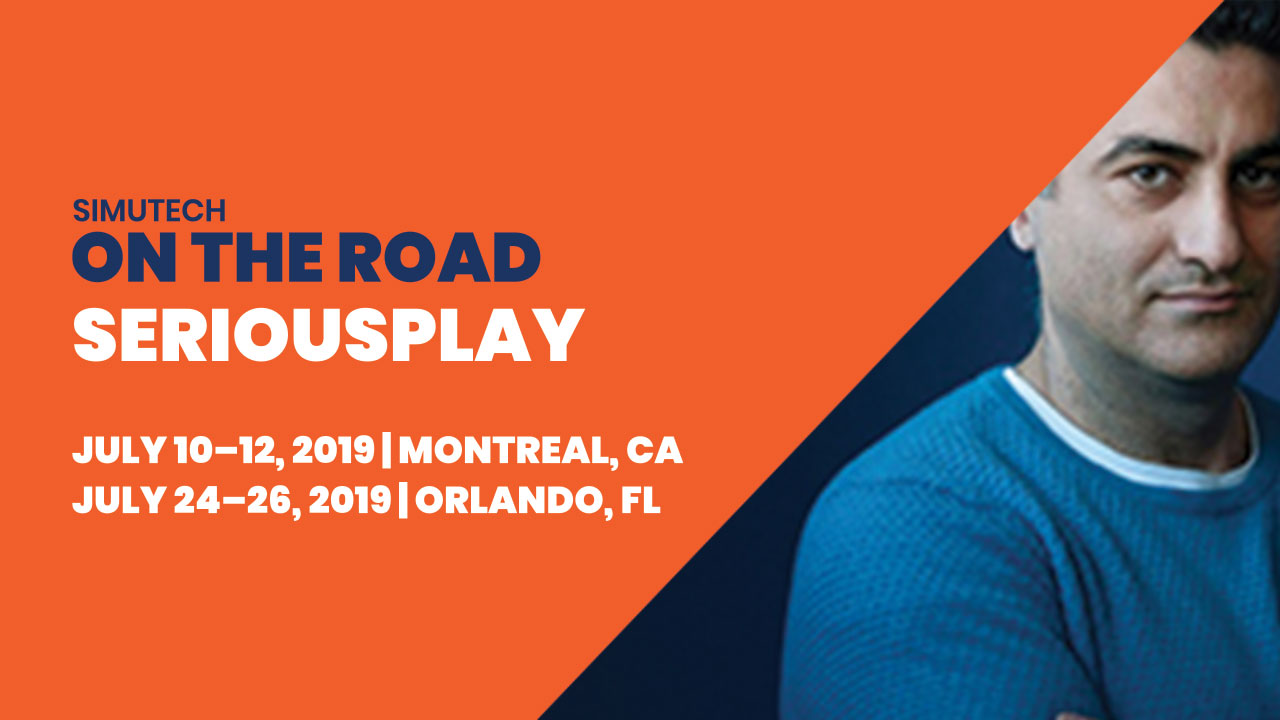 Simutech Multimedia was at the 2019 Serious Play Conference over the past few weekends. We met up with Samer Forzley, CEO of Simutech Multimedia, to talk about his experience, the atmosphere of the event, and what he shared with the audience during his speaking event.

Could you tell me a bit about the overall atmosphere of the 2019 Serious Play conference?

The conference was in Montreal. Montreal is a beautiful city as you know, and we attended it two weeks ago. It was a great atmosphere. The location was at the University of Quebec. The attendees were a mix of industry and education. It seemed to be a very active event. There were a lot of people in different sessions. We enjoyed meeting different people and attending some of the sessions there.

What was that audience like? Who attended more specifically?

It was an interesting conference because it was a nice mix of everything. There were people there from an academic background who were reviewing new research they just released and talking about their recent research be it a PhD work or masters work or just general research. There were also some educational institutions attending to figure out how to leverage serious play, serious games to teach the next generation. There was also industry, so people who actually produced the video games, the serious games, as well as companies like ours that actually leverage serious games to actually achieve something. So, in our case, trying to help manufacturing close the skills gap. It was a nice blend because there was a good sharing of ideas and understanding of what the current level of research is at the same time.

So how did your speaking event go?

It was great actually. We had a full house so to speak. We had, again, very similar to the audience; we had a blend of everything. We did share with the audience the issues that manufactures are facing, especially the whole skills gap and retention, onboarding staff, how to actually find and identify the right talent, and then we showed how our software helps with that. We opened it for questions from the audience and the questions were great. They were a blend of how do you do the development of the software to who are the customers and how do they actually achieve success and how do you measure success. It was a great way to actually show what we do and how we actually solve a problem that is real using serious games.

So, what were a few of your main points that you presented if you could just expand upon those?

There are some serious problems in the manufacturing industry in terms of finding the right skill and closing that skills gap, but also in that onboarding of a new employee and making sure they are productive right away. What we wanted to share as the main point is that gaming is a great way of doing that. You can immerse someone into a learning environment and let them practice as close to what is real and then by doing that, they ramp up faster. They ramp up with the same methodology across the board. So, one employee in one plant will work the same way as another employee in a different plant. By virtue of that they are ready to be productive right away on the factory floor. We really wanted to make sure that people understood that gaming and simulation lets someone be immersed in that world and achieve that learning objective much better than any other way of teaching.

What was your overall opinion on the experience?

It’s a great event. There were actually two events back-to-back. There was another session in Florida that happened two weeks after that that we were excited to go and speak there and meet the audience again. We would love to participate again. We learned a lot about some of the new innovations that are happening. It is good to see what other companies are up to and what academic is up to, but, also, being engaged with that community of likeminded people and share thoughts and ideas. We were very thankful that we were invited to speak, and we look forward to attending again.

Any last thoughts about the 2019 Serious Play conference? Any last words?

There will be a few more conferences that we will be attending soon. There is a manufacturing expo in Toronto that we were invited to speak in August. Similarly, ProcessEXPO in Chicago in October and we will be there to share very similar thoughts and ideas on how we can help manufacturing with gaming and 3D environments.