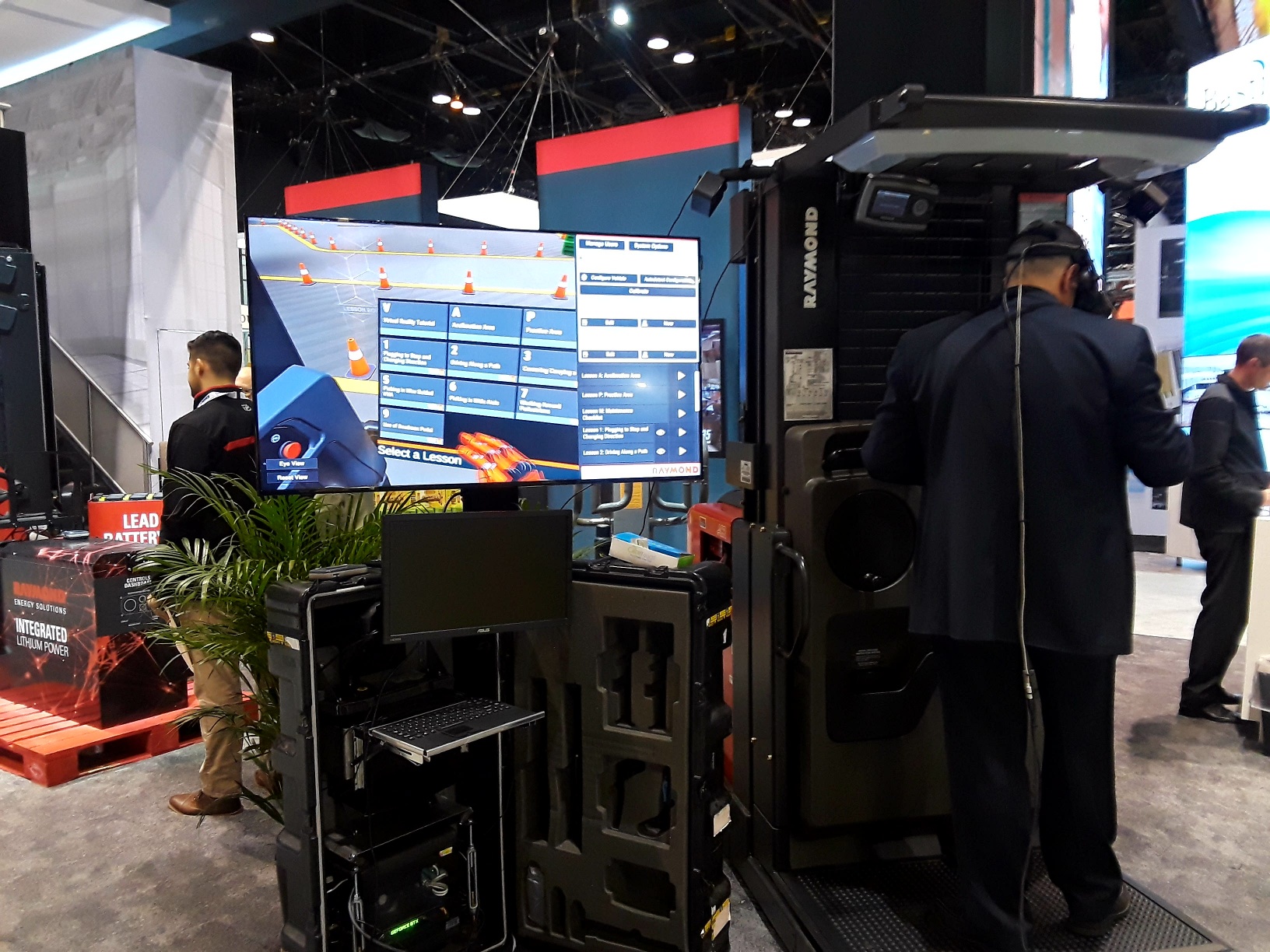 This past week Simutech Multimedia walked the show floor of the premier supply chain show ProMat 2019 in Chicago at McCormick Place. The focus this year was absolutely on showcasing intelligent manufacturing solutions for a variety of operations, including material handling and warehousing.

A new piece of technology either using augmented reality (AR), virtual reality (VR) or robotics was in almost every aisle. We’ve been talking about the benefits of these devices and simulation used in training for awhile now. So, it was great to see on display at the Raymond booth the Raymond Virtual Reality Simulator, which is used to train new and existing lift truck operators working in warehousing and distribution facilities.

The amount of digital technologies and innovations abounding at ProMat this year makes a clear point that the material handling world is changing fast. According to the new survey, entitled MHI 2019 Annual Industry Report – Elevating Supply Chain Digital Consciousness, eight out 10 respondents believe the digital supply chain will become the predominant model in the next five years. The report, which surveyed one thousand supply chain leaders, also found a 95 percent increase in projected spending from industry companies this year. However, workforce development and hiring skilled labor is a challenge for 65 percent of the respondents. Sixty five percent of respondents anticipate artificial intelligence will grow in importance in the next five years, that’s compared to only 13 percent of respondents making that prediction last year.

The explosion of e-commerce and changing expectations from customers everywhere is putting a lot of pressure on both manufacturers and distribution centers to increase throughput and efficiencies. This has led to an overwhelming pressure to find a competitive edge wherever possible. Business is no longer being done as usual; the times are changing and the advances in technology are speeding up to meet the industry’s evolving needs.

Automation is the usual solution to increasing throughput and increasing efficiencies. However, for years, one of the drawbacks of automation identified was its rigidness. Once a piece of automated equipment was installed, it became fixed in place and couldn’t easily be changed or moved. Plus, automation has been a very expensive option, and for some, the price tag was out of reach.

Many new vendors at this show presented “flexible automation” solutions. One example was presented in a seminar presented by LogistiVIEW, which discussed how AR can be used to unbolt automation and help workers do their job. Through computer vision software, workers wearing industrial smart glasses, such as Google Glass, can see a series of lights and hear voice instructions directing them on how to fill orders.

“AR turns your workforce into a tool,” said Seth Patin, founder and CEO of LogistiVIEW. “The technology connects a worker to everything around them in the workplace.”

He said warehouses and distribution centers can achieve flexible automation by using AR in this way because it increases throughput and decreases inventory touches, but also allows for changes to be easily made.