Three Asian nations are leading the global charge to digitize manufacturing through robots.

By 2019, 2.6 million units of industrial robots will be employed worldwide, according to the International Federation of Robotics. Many manufacturing companies see these robots as key to boosting workforce productivity and manufacturing more valuable products. Increasingly, more companies around the globe are developing a taste for automated employees.

The demand for industrial robots has many layers: these automated robots are more energy (and cost) efficient, and adjust to new materials more quickly than your average worker. But most of all, robots link the real-world factory with the virtual-world factory (e.g., Industry 4.0 and the Industrial Internet of Things). The manufacturing industry is becoming increasingly digital, and these robots are just another example of how.

China Out in Front

In the race for automation in manufacturing, countries in the European Union have traditionally held the lead. In fact, of the countries with an above-average number of industrial robots, 65% are in the EU. Central and Eastern European states, specifically the Czech Republic and Poland, have the highest growth in robotic sales: from 2015-16 alone, sales grew by 25%. Average growth in this region is predicted to increase at a steady 14% between 2017-19.

But just because the EU has been ahead in robot sales, that doesn’t mean they will be for long. In the past two years, Asiatic countries, specifically China, Japan, and the Republic of Korea, have been moving toward the digital market by buying automated robots. The Republic of Korea and Japan are ranked second and third in international sales for industrial robots. In 2015 alone, the number of automated robots in Korea grew by 55%, and in Japan by 20%. 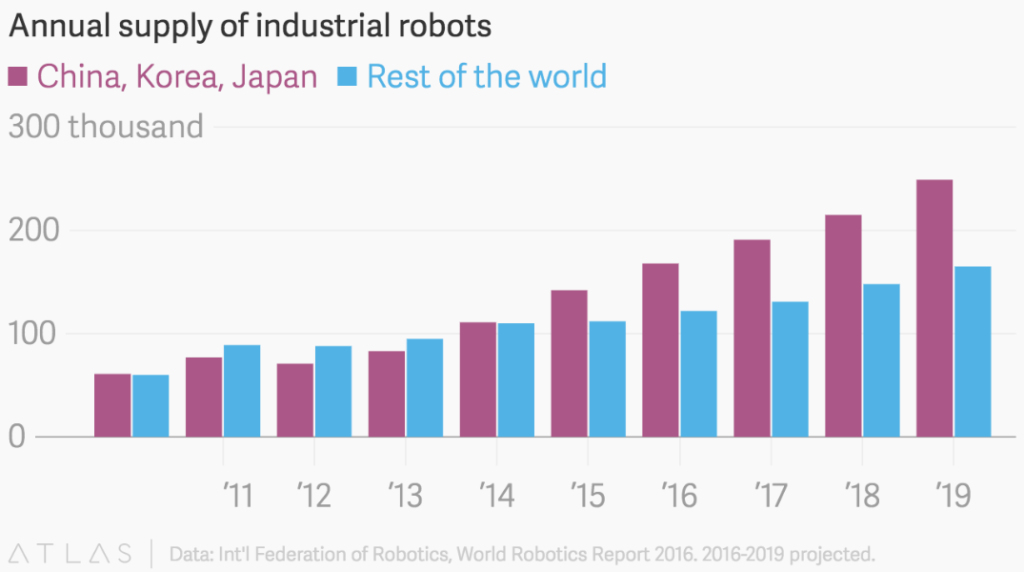 However, of the three countries, China is the most serious in their move to digitize manufacturing. In 2015, China announced their 10-year plan – “Made in China, 2025” – which vowed to make China one of the top technological industrial nations in the world. The plan aims to have a robot density of 150 units by 2020. That means 600,000-650,000 new industrial robots will have to be installed in the next four years (in comparison, only 254,000 units were sold in the global market in 2015). China’s plan is ambitious, to say the least.

Internationally, manufacturing industries are focused on increasing the collaboration of human and robot employees. Although the EU has historically had the most automated employees, China and other Asiatic countries are picking up ground. The move toward digitization is inevitable: so what does that mean for human employees?

In 2016, newly installed industrial robots increased by 14%. The more automated robots are installed, the more companies’ production capacities grow. Because China is making such radical moves toward digitization, a great number of European manufacturers are opening new locations in China, rather than the EU.

It seems China’s plan “Made in China, 2025” is exemplary: by moving toward digitization, China has created jobs in the manufacturing sector. Automated employees seem to be the future of manufacturing – all over the globe.

“Asian Manufacturers Are Adding More Robots than the Rest of the World Combined.” Quartz.
https://qz.com/797525/asian-manufacturers-are-adding-more-robots-than-the-rest-of-the-world-combined/